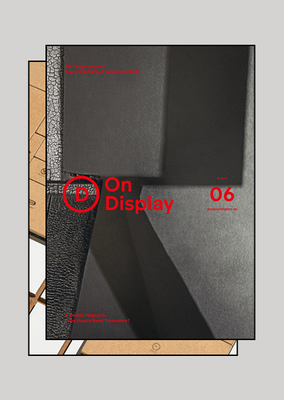 The sixth exhibition in the Design Display series and the accompanying magazine On Display 06 consider the question of transience and highlight two different perspectives. One perspective focuses on insights into an artistic and philosophical way of thinking and seeing, while the other looks at technical and economic paradigms associated with the theme of transience.

The first part of the magazine is dedicated to various concepts of transience. An art historical essay illustrates transience in life in East Asian cultures. Following this, we present the series “Smoke” by the Dutch designer Maarten Baas. For the series, Baas worked on design furniture classics with a flame-retardant device. He gives an interview where he talks about his projects that are entirely dedicated to the subject of time and about his working methods.

In our consumption-happy society, questions about sustainability and sustainable design are becoming increasingly urgent. And so the second part of the magazine focuses on transience relating to obsolescence. The conceptual study Phoneblocks by Dave Hakkens (another Dutch designer) includes a modular smartphone in the context of an international online community. This project is juxtaposed with other modular smartphone projects. An adaptable solution is introduced with the aim of extending the life of a commodity. A concluding essay using examples from the fields of furniture, architecture, and automobiles discusses the question of how a modular concept can function as a strategy.

Autostadt [car city] becomes design city. The idea has become a reality with the Design Display exhibition, where two different exhibits are confronted for four months in a pyramid-shaped glass case and are associated with a main theme. The aim is to stimulate dialogue and to develop an expanded design concept throughout the exhibition period. The On Display magazines (German/English) are published to accompany each exhibition. Each issue highlights a pair of exhibits in more detail and provides more background information with essays and interviews.