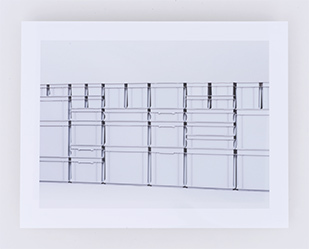 A limited number of prints of the second form Edition, a photograph by Gerhardt Kellermann, is available in our shop. This piece was created for the Focus section of form 253.

One of the Swiss products featured in the “Land of Design Switzerland” issue is the Rako-Box made by the company Utz. This standardised, all-purpose container is manufactured in various sizes and can be stacked together. The wall of Rako-Boxes shown in the second form Edition was originally created during the photo shoot for the Swiss issue.

Gerhardt Kellermann founded his own studio in 2012 in Munich after he has been working for designers like Sam Hecht, Nitzan Cohen und Herbert H. Schultes. Alongside his work as a photographer, he is a trained industrial designer, and comes up with products commissioned by others or based on his own ideas. His minimalistic style, with pared-down forms that feature carefully thought-out surfaces and reflect light in ingenious ways, is in evidence in both his photographic work and his three-dimensional creations. His longstanding collaboration with the product designer Ana Relvão originally coming from Portugal prompted the two to set up the Relvão Kellermann studio in 2014, where they develop products for clients such as Bulthaup and Auerberg. Beforehand Relvão gained experience in product design while working at Miguel Vieira Baptista, Stefan Diez Office and Designaffairs.

The hand-signed photograph, which is unframed and printed on gloss paper, can be bought for the price of 70 euros, including VAT but excluding shipping. The overall dimensions are 424 by 329 millimetres. The edition is limited to 50 copies (plus 1 AP).